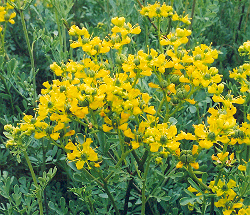 In this blog we will learn about all things herbal, with a focus on magic and medicine.

Let’s begin with one of my favorite herbs, Ruta Graveolens

Rue is at home in the kitchen as much as the apothecary.

Italian peoples have eaten the young leaves fresh in salads, soups and spreads for centuries.

Vinegar are made with the plant to be used as condiments and the leaves dried and used as tea can help dispel fevers and ague.

Rue was able to fend off the black plague by virtue of her pungent oils.  The pungent oils dispersed when rubbed onto a person, and this was said to repel the plague-infested fleas that were sickening all of Europe during medieval times.  To the same end, rue was rubbed directly onto floors, cribs, doorways, and beds.  Also one of the ingredients in the original Four Thieves Vinegar which was a common floor wash for preventing infection in household, church or hospital.

The pungent oil was used to treat nervous disorders of the mind and to calm the hysteria.

Rue is very well known for her ability to heal all disorders of the womb and to prevent miscarriages when the baby is being carried to low.

A powerful vermifuge, decoctions and tinctures or rue have been used to expel all manner of vermin form the body.  Also reputed to restore and regenerate failing eyesight.  In more recent times, Rue is used in homeopathic medicines for the treatment of bursitis, gout and any rheumatic condition.

Rue was earned fame in the Mediterranean as the Holy Herb of Grace, able to turn the evil eye form oneself and to break hexes and curses.  This is accomplished by wearing amulets, anointing yourself with oil and/or sprinkling rue tea around the home.

One of the best-known amulets is the Streghe Cimaruta charm from Italy.  This highly sacred and symbolic amulet is worn for protection and to fend off the evil eye.  It is shaped like sprigs of Rue and is a very ancient and powerful symbol  Rue sprigs are dipped in holy water and used to assuage altars and create sacred space.

In magic, Rue, by virtue of her bitter principles, is said to “fix” or “bind” a spirit to earth.  This is accomplished by crafting an amulet of fresh or dried rue leaves and fruits which is used by anyone needing grounding or to reconnect with their own lives.

It is very useful when one has traveled to far too for too long during astral projection and can be remedied by wafting the smoke from burning rue leaves over the person.  This virtue of “binding “is also employed by some magical practitioners in love matters.  Some believe if you leave rue in the shoe of a lover you will be bound forever

Planted by entrances and doorways, Rue will repel any negative or malicious energy that seeks to enter the home.  Wearing the fresh leaves around the neck is thought to keep werewolves, goblins, and vampires (particularly the psychic type) at bay.  On the other side of the pentacle, Rue is often employed in love and attraction magic due to her binding and fixative abilities.

Incense is burned during love spells of all types to empower and enrich love energy.  The pungent oil and scent bring strength to the spirit and body and are used in cases where one is worn out from life and needs a burst of energy.  In cases where imbalances and illness have resulted due to a rundown condition, Rue restores vitality on many levels.  A bit of dried fruits carried will bring fortitude when needed and reverse ailing health.

Take a quart jar and fill it with fresh rue leaves.

Pour over this sweet liquor such as blackberry brandy and let sit for 24 hours.

The bitter principles will give off into the brandy, making a digestive tonic to be taken by the tablespoon full before meals.

To a gallon jar of apple cider vinegar add:

A handful each of :

A ½ cup of fresh honey

Let all the herbs steep covered for two weeks in a dark ,cool place.

It is best to strain off the herbs as may eventually molder.

Pour into bottles, add a fresh clove of garlic and cap.

Add a teaspoon to your food before you eat it as you would any other condiment. It is said to restore digestive fire and fortitude to the body, make the meek bold and prevent infections.